IVC is essentially high dose Vitamin C in pro-oxidative 25g to 100g treatment doses. This is incredibly different in comparison the low-dose anti-oxidant doses you may be taking daily for general health.  It has particular benefit in Naturopathic Cancer Care and the naturopathic treatment of chronic infections.

In 1931, German scientist Otto Warburg Ph.D. discovered that cancer cells have an altered metabolism in comparison to healthy cells.  His thesis showed that malignant tumors operate on anaerobic glycolysis, in which glucose is the main fuel for growth of cancer cells.

Looking at the structure of glucose and ascorbic acid (vitamin C), they are very similar: 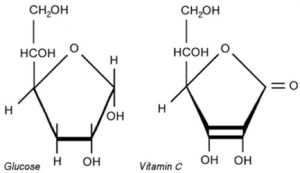 The theory behind high dose vitamin C and its supported research over decades is that cancer cells will allow vitamin C molecules to enter their cells, because they mistake it for glucose. When there are high amounts of vitamin C inside the cancer cell, vitamin C shifts from being an anti-oxidant to having a pro-oxidative effect. Vitamin C interacts with iron, where it produces hydrogen peroxide, a potent oxidative substance. Cancer cells are very low in catalase, an enzyme used to promote anti-oxidation of substances like hydrogen peroxide. Because of this, high amounts of vitamin C can cause tumor cell lysis or destruction. We can think of Vitamin C as a non-toxic chemotherapeutic-like agent. Intravenous Vitamin C is the only way to achieve these high pro-oxidative levels.  Hence, its popularity as a Naturopathic Cancer Care therapy.

The Naturopathic and Allopathic medical community is continuously finding reasons to study IV Vitamin C in cancer because it is showing improvements in inflammation, tumor markers and in some case studies, tumor size.

Contrary to popular misconception, IVC is NOT AN ANTI-OXIDATIVE THERAPY WHEN THE VITAMIN C IS ADMINISTERED AT THESE HIGH PRO-OXIDATIVE DOSES. Our Naturopathic Doctors at the Nardella Clinic in Calgary have used high dose vitamin C for nearly two decades. Numerous studies have been published showing the benefits of IVC when used in combination with chemotherapy and radiation – IVC can actually increase the sensitivity of some pathological tumor cell classifications to chemotherapy and radiation protocols!

Other chemotherapeutic agents, which according to published research that react positively to the administration of IVC include: cisplatin, cyclophosphamide, carboplatin, 5-FU, etoposide, gemcitabine, vincristine, paclitaxel, docetaxel, doxorubicin, epirubicin, tamoxifen any many more.

In some cases, depending on the type of cancer, naturopathic doctors will combine Artesunate therapy with IVC therapy, for better targeting and apoptotic potential of cancer cells.

Naturopathic doctors at the Nardella Clinic in Calgary also apply high dose IVC in cases of chronic infections such as Epstein-Barr Virus, Lyme Disease, and CMV.