Most people are aware of auto-immune conditions like Celiac disease, rheumatoid arthritis, Multiple Sclorosis (MS), and Ulcerative Colitis. All of those conditions are life-changing, difficult to deal with, and have no cure as such. What we forget about are diseases that aren’t so obvious, or that we think of as purely cosmetic. These conditions are a nuisance but can they be life-altering? Take a look at this skin disorder.

How would you describe this? Raised, red, scaly, itchy. How about life changing? Now what if it were covering your entire body, head to toe, and never went away?

What you’re examining is psoriasis, an autoimmune condition that exclusively affects the skin. The type pictured here — plaque — is most common, but it can also manifest with small pink dots (guttate) or in clusters of white pustules (pustular).

This is not due to fungus, bacteria, virus, chemical exposure, burns, or anything else we normally associate with damaged skin. Psoriasis has one cause: autoimmunity. It has no direct impact on anyone around the sufferer, so the next time you see someone with this condition remember that they’re not contagious, they’re frustrated.

Our immune system as a whole is a mystery, so our understanding of autoimmune disorders is poor, to say the least. What we know is more or less a cause and effect relationship: stress can make it worse, a hypoallergenic diet can make it better, and so on.

How do you know if you have psoriasis? There’s no test, so finding out is purely a clinical diagnosis. A doctor who knows what they’re looking for is able to say yes or no. He or she may also take a scraping of the affected area to rule out other conditions and causes. The bad thing about psoriasis is that it’s a chronic condition. There’s no cure. That information aside everyone should know that psoriasis doesn’t guarantee a life of suffering. True, it never goes away, but there are many ways to decrease the severity and frequency of “flare ups.”

The key is to level out the immune system one way or another. This may include special diets, herbal medicine, IV nutrients, acupuncture, various supplements, Hyperbaric Oxygen Therapy, Dermasound treatments, and specific topical homecare.

How effective are these treatments? Here’s a story that will give you an idea:

A 24-year-old woman came to the Nardella Clinic of Calgary with severe psoriasis, having received her diagnosis a year earlier. It affected most of her body from top to bottom. As you can probably imagine, the cumulative effect of the itching and pain was great psychological distress. The condition progressed rapidly, flaring up in response to stress. It was a classic negative spiral.

The naturopathic clinic’s goal was to decrease the woman’s symptoms and modulate her immune system to prevent future flare ups. One of the first steps was conducting a food allergy test, knowing that poor gut health can worsen — or even cause — autoimmune conditions. She turned out to have some mild to moderate food sensitivities. She eliminated these foods from her diet and began taking probiotics specific to her condition. In addition to the probiotics, she also began using several supplements, both oral and topical.

One of the most effective treatments used was ten Hyperbaric Oxygen Therapy (HBOT) sessions. HBOT has a good history in clinical settings and in published research for the treatment of psoriasis. HBOT has a potent effect on the immune system, bringing it into better balance, and it aids the body to heal damage through various means.

The combined result of this protocol was more than 50% improvement in skin patches. The patient was able to feel comfortable wearing shorts for the first time in a year. Further, she reported little to no pain, and was able to resume her normal life. Her condition will continue to improve as she follows the recommended diet and supplement protocol.

The pictures below are day one (left) and day 15 (right). 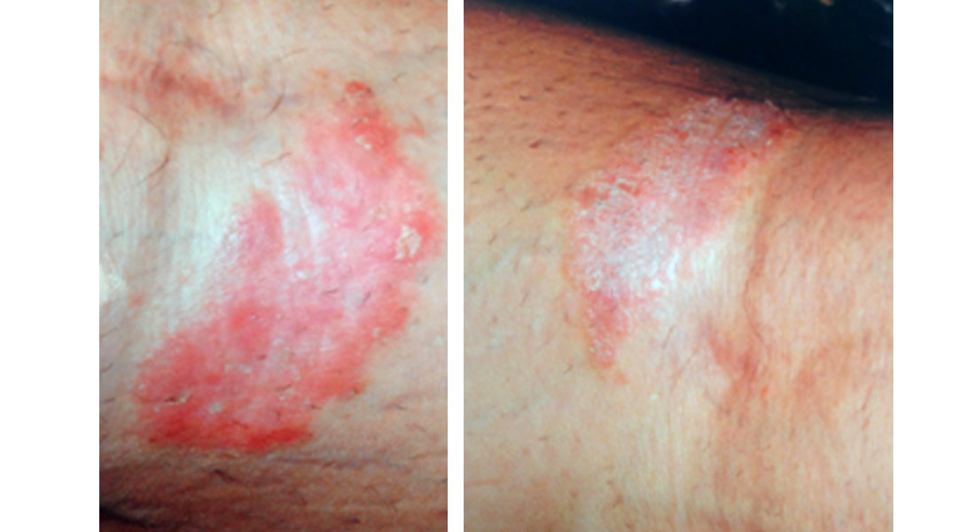