October is Autism Awareness month in Canada. Current statistics show that 1 in 68 children are now diagnosed with Autism Spectrum Disorder. Autism is the fastest growing neurological disorder in Canada. Naturopathic medicine has the unique ability to treat Autism by finding the root cause and restoring the body to a state of biochemical balance. One of the most powerful tools a naturopath has to help a child with Autism heal is Hyperbaric Oxygen Therapy.

Hyperbaric Oxygen Therapy is the administration of 100% oxygen under pressure. The combination of pressure and 100% oxygen allows for extra oxygen to be dissolved into the plasma, and delivered to areas that require it, such as the brain. Children with Autism Spectrum Disorder often have areas of poor oxygen delivery and blood flow in areas of the brain responsible for language and social behavior. Treatments are typically 1-1.5 hours in length, 5 days a week for a total of 40-60 sessions.

A study published in the Egyptian Journal of Medical Human Genetics in 2014 (El-baz et al.) concluded that hyperbaric oxygen improved both autistic behaviors, and brain imaging in Autistic patients.  Patients received a series of HBOT treatments at 1.5 ATA with 100% oxygen. The study found an increase in cerebral blood flow after hyperbaric treatments. This correlated with the fact that there was a significant improvement in all of the following areas: 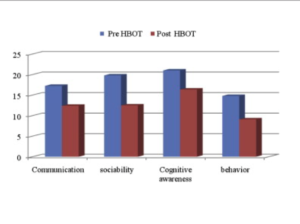 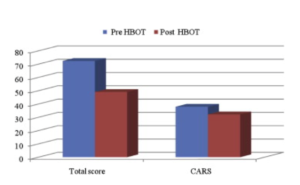 Hyperbaric oxygen helps to address one of the underlying causes of Autism through healing the brain tissue and supporting development. Oxygen delivered under pressure has the following effects on tissues including the brain:

The naturopaths at The Nardella Clinic have offered Hyperbaric Oxygen therapy for patients with Autism for nearly a decade. Although each child is different, patient’s families typically report increased vocabulary, improved eye contact, increased interaction with siblings and other children, and an improved awareness. When used in conjunction with other therapies offered by our naturopaths, hyperbaric oxygen therapy is an extremely effective tool for helping to heal the brain.

Naturopath, Dr. Meghan Haggarty, is a Fellow of the Medical Academy of Children’s Special Needs. Using an individualized biomedical approach, she specializes in the treatment of Autism Spectrum Disorder.